Dream for a better life 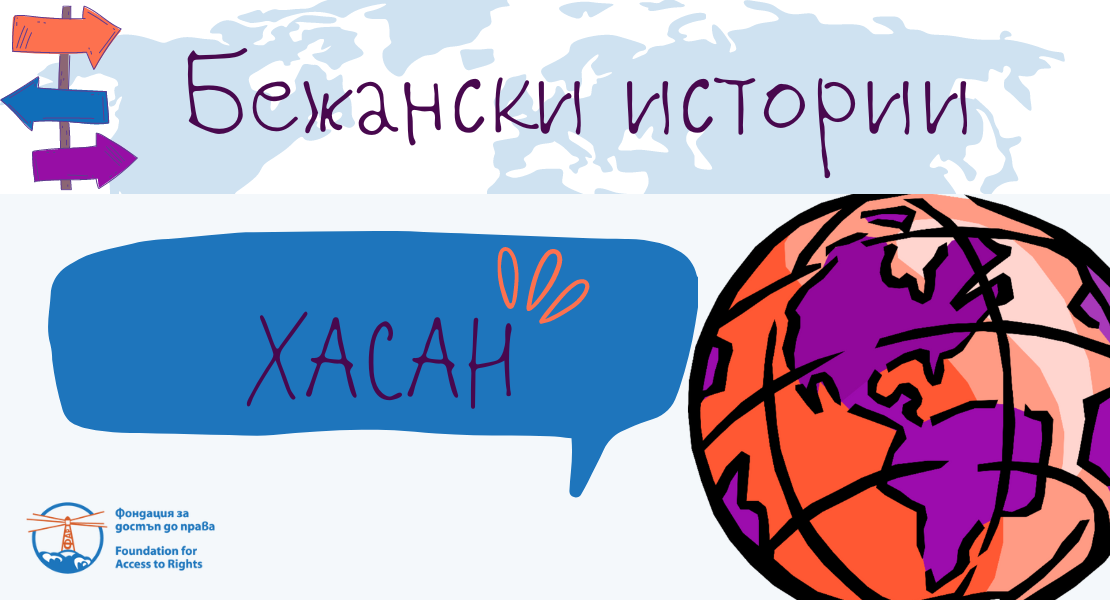 This is the story of a young Palestinian boy from the Gaza Strip. He has come a long way to reach Bulgaria, bringing with him only the hope and faith that he too can live a normal life someday.

His story, unlike that of many other Palestinians in his situation, has a happy ending.   Although he has been through numerous trials, closed doors, and several relocations between detention centres for illegal immigrants to registration and reception centres for asylum seekers of the State Agency for Refugees, in the end, after a two-year wait, in 2021 he managed to get international protection and for him, life was just beginning. As they say, with perseverance, commitment and faith anything is possible… even the impossible!

We will use the fictitious name Hassan at his request to maintain his anonymity. Meet him!

FAR: Where are you from? How long have you been in Bulgaria?

Hassan: My name is Hassan and I'm from Palestine, from the Gaza Strip. Life in Gaza has been very difficult, especially since the 2007 coup when Hamas took control of the territory. The economy in Gaza is zero and since we are under blockade, we do not have normal access to things like electricity or water. In addition to the conflict with Israel, there is an internal war between the various factions in the Gaza Strip, and this is unfavourable for the people there.

FAR: What are your reasons for leaving Gaza?

Hassan: I myself am a refugee in the Gaza Strip. I left home because of serious threats, both to my life and safety and to that of my family in Gaza, because we have family problems and are perceived as opponents of Hamas. No one can protect us there against Hamas. It is true that my family received food, medical assistance and education from the United Nations Relief and Works Agency for Palestine Refugees in the Near East (UNRWA), under which we are registered as Palestinian refugees. However, this Agency cannot protect me from Hamas. For several years now, there has been a decline in the assistance for people in need provided by the Agency, which started while I was in Gaza. UNRWA has serious financial problems.

FAR: Can you go back to Gaza?

I have no choice regarding my return to Gaza. If I do, there are three possible scenarios - to kill me, to arrest me or to leave me disabled for life. By no means can I return and there is no way to defend myself.

FAR: What challenges did you face in Bulgaria?

I have been in Bulgaria for 3 years now. At first, I was imprisoned in the detention centre in Busmantsi. There was no medical care there. Only in very urgent cases and if you protest it was that they’d throw you into an isolator. I applied for protection from the very beginning. It was only after 4 months that I was released from Busmantsi and transferred to an open centre of the refugee agency in Sofia. My request was unfortunately denied. I appealed to the court, but from there I was refused and found myself on the starting line again.

As I had new evidence, I submitted a new application for protection with the help of the Foundation for Access to Rights - FAR and Attorney Valeria Ilareva.

Despite the application, I found myself in Busmantsi again in 2020. Due to the pandemic and the large number of people infected with COVID-19 in the centre, I was transferred to the other detention centre in Lyubimets near the Turkish border. I was detained for four months until finally, after another court battle and a court decision in my favour, my application for protection was admitted for consideration. In September I was transferred to the open centre of SAR in the town of Harmanli. They took care of me there and I couldn’t complain. I received medical care after suffering from fever and lung problems.[1]

FAR: What is your life in Bulgaria?

Now I work in a company for electrical devices and will soon move to the town where my work is located. I feel safe in Bulgaria and I want to stay here. My favourite place is the National Palace of Culture. I often go there with friends. I have few friends, but I feel at ease with them.

Bulgarians are good people, but sometimes when I listen to a conversation between Bulgarians, I think that there is a problem and that they are arguing about something because they are talking loudly. But I'm used to it (laughs).

This is how we ended the interview with Hassan, leaving us with the hope that life will still smile on him someday.

Just a day after the interview, he received the long-awaited news that he was receiving humanitarian status. He came here, in our country, because of his striving for a more normal life ... A life without fear, without bombs, without war. A life in which there is understanding for the other, love and protection!

This article was prepared by the Foundation for Access to Rights-FAR on a project funded by the European Network for Stateless Persons. The aim of the project is to examine the situation of Palestinian refugees from the Gaza Strip and the West Bank located in Bulgaria and the application of Article 1D of the 1951 Convention on the Status of Refugees to them.

For more information, see our report on the topic.

[1] Hassan's second application for protection is based on Article 1D of the 1951 Convention. on the status of refugees and that he is already recognized as a refugee by the international community as he is registered with UNRWA. The State Agency for Refugees, when dealing with cases of Palestinian refugees, must check not whether they are being persecuted in the country they come from, but whether they can still enjoy UNRWA protection if they are returned. If this protection is terminated for some reason and they cannot enjoy it, then people like Hassan should automatically receive protection in Bulgaria.