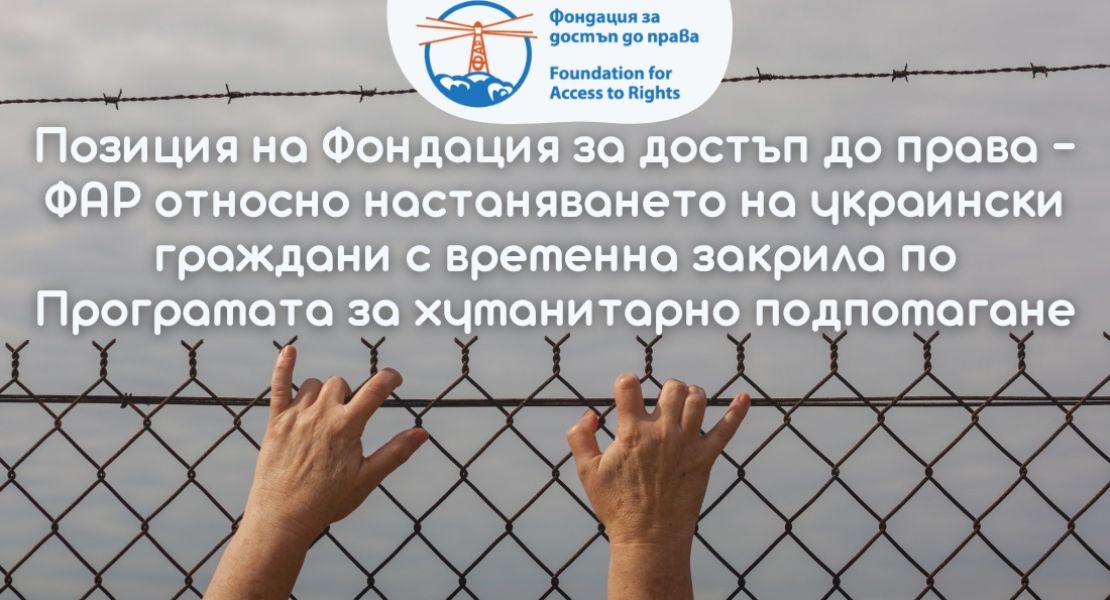 At Foundation to Access to Rights – FAR, we would like to express our solidarity with the Ukrainian citizens who hold temporary protection in connection to the tensions created around the ending of  the Humanitarian Assistance Program and the lack of clarity regarding any subsequent measures and actions being undertaken by the authorities.

The program, organized and executed in line with the Counsel of Ministers’ decision has now been twice extended. The last approved extension period expired on the 31st of October 2022. Despite the fast-approaching expiration period, there was no decision taken by the government to renew those measures, no less any official information existed of what will happen to more than 18 000 people in vulnerable positions, who are currently based in hotels. At the last possible moment (on the 31st of October 2022) the program was extended until the 15th of November 2022 with a decision by the Counsel of Ministers. According to it, during a short period of a fortnight, Ukrainian citizens under temporary protection shall be relocated from the hotels to designated sites listed in the Register of shelters. The list of these places remains unknown. In the meantime, what has become clear is that 25 newly arrived Ukrainian refugees have been driven to the Ministry of Interior’s distribution center in Elhovo city and have been sheltered in wagons.

The escalation of tensions in the current situation was completely predictable, given the lack of durable long-term strategy for accommodating people under temporary protection in Bulgaria and the broken dialogue between the responsible institutions, the Ukrainian refugees, and the civil organizations which are to take care of them. Persons granted temporary protection should receive written information in a language easily understandable to them about the rules of temporary protection pursuant to Article 39, point 2 of LAR. However, in this case, this right of theirs was violated. The main principle of working with vulnerable people, which states that they should be informed and prepared to cooperate and actively participate in the process, was not observed. Surprisingly to everyone, and most of all to the Ukrainian refugees themselves, the current measures undertaken by the authorities with regards to the refugees repeat the chaotic attempt for their accommodation in the so called “state camps” from the end of May this year, which had then also caused similar tensions.

The subsequent attempt to provide transit accommodation to those under temporary protection at the MOI’s distribution center in Elhovo city, once again causes bewilderment and righteous indignation. The center in Elhovo city is part of MOL’s structures and is designed for the purpose of detention and identification of people who lack residency rights on Bulgarian territory. Under identical conditions, accommodation of people with a right of legal entry in the European Union, or who have been granted, albeit short-term, status of temporary protection regardless of their vulnerable positions, is completely unacceptable. It also sends a clear message that the State’s conduct towards those people is motivated mainly by considerations of expediency rather than a willingness to obey the law with care and humanity.

At Foundation for Access to Rights – FAR, we insist that the State develops and introduces a long-term strategy for accommodation and integration of Ukrainian refugees to overcome the sense of permanent insecurity which thousands of people fleeing war have been made to experience. From the initial accommodation of those who had received temporary protection in hotels, it became clear that this was a short-term, crisis measure which does not offer a durable solution. The time has come to seek and apply more systemic solutions, entirely compatible with the requirements of the existing national and EU legislation.

What should be recalled is that the State executive powers decided to preclude the access of Ukrainians to the procedure of obtaining international protection. In contrast to those seeking international protection, Ukrainians under temporary protection are not granted a period of adaptation, not do they have shelter and food secured by the State. Without this security they cannot organize their residency and remain independent from State support. From the very beginning, they face an extremely hard choice – either to manage by completely independently, or to be dependent on State support without having clarity on what conditions they must cover for it and how long they can receive it for. This uncertainty combined with the lack of measures boosting their staged exit from the Humanitarian Assistance Program, has a negative impact on their opportunities to start leading an independent life. It also impedes their integration into society. The State executive powers’ attempts to constantly move those people to different areas in the country undermines the efforts made so far for integration, and forces them seek employment, and access to education and healthcare without any guarantee of success.

Foundation for Access to Rights – FAR calls on the responsible authorities as a matter of urgency to develop and adopt a durable plan for the provision of accommodation and aid to Ukrainian refugees. According to us, the State has an obligation to provide them with timely information on the places and ways for receiving accommodation, as well as to take measures to boost and aid the start of their independent life. In this regard, refugees’ accommodation must allow for the actual practice of their right to work, for them to integrate in society, and not be entirely dependent on State funding during their stay in Bulgaria. We plead that their placement in MOI centers be ceased immediately. Such a practice robs people of access to administrative and social services, as well as access to adequate medical care. This could be easily avoided through a more foresighted planning of measures and execution of placement in accommodation. Last but not least, it is of key importance to engage in dialogue with the civil sector for the sake of a more humane and multidisciplinary care for those fleeing war.