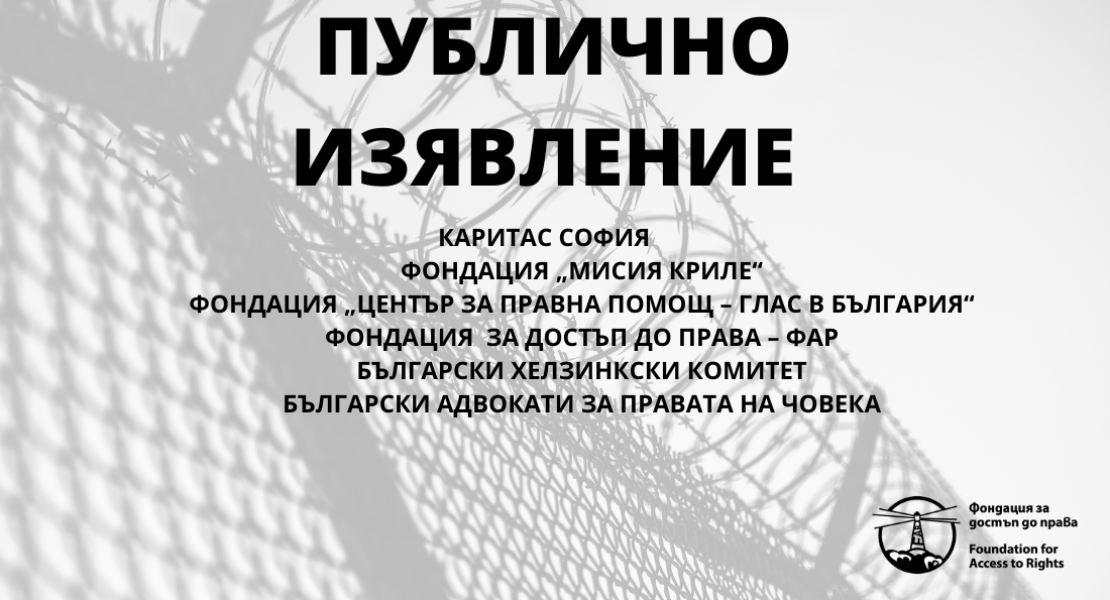 "I thought to myself how beautiful shoes are; there can never be ugly shoes in this world, all shoes are beautiful" - the words of A.H., an Afghan citize who had been previously granted humanitarian status in Bulgaria and then forcibly repelled in a particularly humiliating way to the territory of Turkey on the 27-28th April this year, forced to walk barefoot with bleeding feet for days.

by the undersigned organisations

At the beginning of June 2022, mr. A.H., an Afghan citizen granted humanitarian status, who was a victim of forced expulsion from Bulgaria, the country that granted him protection, approached the organization Caritas Sofia for assistance. The case of mr. A.H. summarizes the established pattern of particularly serious violations of fundamental human rights at the Bulgarian-Turkish border, as expressed in over 150 alerts received by the NGO sector this year alone, as well as another 1,681 cases involving 23,742 persons identified at the same border by the Bulgarian Helsinki Committee under the tripartite monitoring mechanism for the period from 1 January to 30 June 2022.

On the 27th and 28th of April 2022, according to his own statements, mr. A.H. was, on three occasions, removed from Bulgaria to the territory of Turkey, not in accordance with the established procedure and not at the established checkpoints, after a police check, during which his Bulgarian identity card was confiscated unlawfully and without due procedure, he was handed over to various officers of the Ministry of the Interior, he was repeatedly beaten, he was stripped of his clothes, shoes, money and telephone and was left in his underwear in a helpless and humiliated state. During his subsequent detention on Turkish territory in a detention centre for illegal migrants and subsequent imprisonment, mr. A.H. was in imminent danger of deportation to Afghanistan, the country from which he had fled and for which reason he had been granted protection and a status in Bulgaria. The circumstances described by mr. A.H. occurred when he attempted to help his younger brother, who had entered Bulgaria with a broken leg, across our land border to reach a registration and reception centre of the State Agency for Refugees (SAR), where he applied for international protection. Mr. A.H.'s minor brother with a broken leg was turned back together with him in Turkey under the same treatment.

Mr A.H.'s case differs from the other reports in that the applicant is fully identified, has been granted protection in the Republic of Bulgaria, has managed to return legally to our country, and the events he has shared contain details with a high degree of certainty. A report is being prepared to the prosecutor's office on this case and we will inform you about the developments in due course. The Office of the Ombudsman of the Republic of Bulgaria has also undertaken its own investigation following a report on this case.

The escalation of violent push-backs in Bulgaria and Europe has been widely reported. On the 26th of May, a damning report on Bulgaria by the global organisation Human Rights Watch was published: "Bulgaria: Migrants Brutally Pushed Back at Turkish Border". On the 29th of April 2022, it was reported that the Director of the European Border and Coast Guard Agency (FRONTEX), Fabrice Legheri, was resigning in connection with the initial findings of the long-running investigation by the EU's anti-fraud office (OLAF), which revealed how the agency's own reporting system was being used to cover up pushbacks in the Aegean sea and its direct involvement. On the 7th of April 2022 the Human Rights Committee of the Council of Europe published a recommendation to the governments and parliaments of the Member States in relation to addressing the gross violation of human rights with the practice of forced pushbacks at the EU borders. Since 2014, the Bulgarian Helsinki Committee's annual border monitoring reports have brought to light hundreds of cases of alleged pushback affecting thousands of individuals, which are increasing every year. On 29.06.2022, a video documentary with the stories of asylum seekers interviewed and turned away from the Bulgarian border was premiered, published by the Center for Legal Aid – Voice in Bulgaria and Foundation “Mission Wings”.

As organizations working for the protection of fundamental human rights and values in our country, we strongly oppose the violent, unlawful actions being carried out at the borders of the Republic of Bulgaria, which reinforce the suspicion not just of individual violations by border officials exceeding their authority, but of an established institutional practice and state policy.

The crises place us at a moral crossroad where we are faced with making our civilisational choice. The issue of violent repulsions is one for which there is no inappropriate time to ask ourselves what path we want to take and whether such cases are consistent with our notions of an European state where the rule of law is respected.

The described case once again raises the question of the ways and means by which our national border is secured, and the need for urgent legislative and practical changes to create fully legal means of lawful access to territory and procedure for people seeking asylum and protection.

We believe that the creation of legal possibilities for lawfull access to the territory of the Republic of Bulgaria under conditions provided for in the law is the only correct solution to serve both the prevention of organised crime of smuggling and human trafficking in the interests of national security and the public order, but also to effectively protect the rights of the most vulnerable people in need of protection and asylum.